For this blog, we’re highlighting one of Indianapolis’s historic neighborhoods, Butler-Tarkington.

Butler-Tarkington has a long history as an Indianapolis neighborhood. Just north of downtown, its borders include 38th Street to the south, Meridian to the East, and the Old Central Canal. The area is named for Butler University, which is within its borders, and for the author Booth Tarkington. 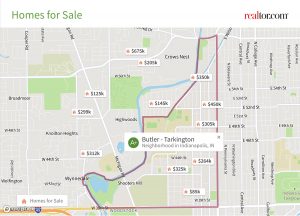 According to the Butler Tarkington neighborhood Association, “the area developed as the direct result of the establishment of electric street railways (” trolleys”) in Indianapolis,” which first appeared in the 1880s.

Today, over 15,000 people live in the Butler-Tarkington area, ranging from young professionals to long-time residents. Around 68% of residents in this area own their homes (niche.com) as opposed to renting.

On Niche.com, Butler-Tarkington receives an overall A+ rating. Its top categories are A’s in Housing, Good for Families, Nightlife, Health & Fitness, Commute, and Cost of Living.

Butler-Tarkington is located in an area that allows it to have its own parks and provide quick access to nearby parks. Discover some nearby places below!

Butler University: Holcomb Gardens | At Holcomb Gardens, you can enjoy twenty acres of hillside overlooking a small lake at the heart of Butler’s campus. This garden is open to all and includes waterfalls, a gazebo, garden house, a grass mall, and more.

Easily Access Downtown Attractions | By being close to the city, you’re never more than a quick drive to top places to play and explore, like the Indianapolis Zoo, White River State Park, The Children’s Museum, and more.

Butler-Tarkington has great places to eat and drink and is close to more Indianapolis restaurants! Some of these choices include:

Hear from a Butler-Tarkington local!

One of Butler-Tarkington’s five-star reviews on Niche.com comes from a current resident in 2018! See what they have to say about life in this neighborhood.

“Fantastic neighborhood with unique, charmful homes, great neighbors, and fantastic eateries nearby. Also, within a short walk to the beautiful Butler University.”

If you’re ready to move to this highly sought after Indianapolis neighborhood, we’re here to help you get there!

Find out how much it would cost you to move to Butler-Tarkington by clicking the “Request a Quote” form at the top of the page, or you can call us at any time at 317-639-9583. We’ll give you a free quote!